The Venice Library Encampment Is A Microcosm Of The City’s Failures: The Current Approach Is Not Working

In late 2021, a handful of tents appeared in Centennial Park, located right outside the Venice Public Library, in the median of Venice Boulevard, just blocks from the beach. Initially, the small encampment was relatively quiet and clean. By January 2022, it had grown to over 20 tents. As of the first week of March, well over 50 tents are congregated there. There are no porta-potties or handwashing stations, but bottles of urine are strewn around the park. 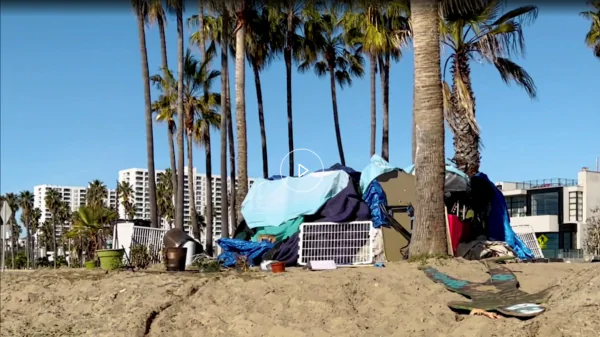 Despite regular cleanups, the encampment has continued to grow and become increasingly dangerous. At 3:15 a.m. on Valentines Day, a dispute erupted, resulting in one man being shot in the leg and hospitalized. The perpetrator remains at large, but the victim is back in his tent, still on crutches. Residents in the area are rightfully frustrated and afraid.

I wondered about the folks living at the park, because I was pretty confident that most people on the streets of Venice have been offered services, shelter, or housing over the past year. When I visited the encampment over several days the last couple months, my suspicions were confirmed.

I was pretty confident that most people on the streets of Venice have been offered services, shelter, or housing over the past year.

Here is what I found: the vast majority had come from either Ocean Front Walk, Third and Rose, or Westchester Park. One young man arrived on a bus from Pittsburgh in early January because he heard there was free housing in Venice. Another man, who actually has a job at Amazon, came from Skid Row because things there “were just too rough.” One man was incarcerated in Florida, then worked construction in Las Vegas where he lost his job, before deciding to come “camp out” in Venice.

Virtually all of them had either been offered or placed in shelter or transitional housing in the last year, but either rejected the offers or exited those settings for a variety of reasons. One woman had been in Project Room Key, but claims she lost her vaccination card and couldn’t get back in. Another man had been moved from Ocean Front Walk to a shelter in San Pedro, but he prefers to “hang out” in Venice. Another person complained he was placed in a congregate shelter, but it was “just too sketchy” and “poorly managed” to remain there. An elderly man from Michigan said he declined Project Room Key because he prefers being outside. One woman claimed she was waiting for a Section 8 voucher and would accept nothing less. Another set of friends camping together said they had been offered shelter, but they preferred to remain on the street until they could get into a Tiny Home. One man in a tent strewn with drug paraphernalia said he had been offered shelter and services, but “wasn’t ready to do that right now.” Another woman, barely clothed, living without a tent in a pile of garbage, and tragically vulnerable, was not coherent enough to have a conversation.

Under our City’s laws, parks are subject to curfews, tents and storage of bulky items are prohibited, and they are designated drug-free zones. And, weapons, loitering, and bad behavior are generally prohibited in library areas. We also have our no-camping ordinance, which allows the City to prohibit camping within 500 feet of a public park or library, and which allows for the removal of dangerous encampments. On February 22, 2022, Councilman Bonin’s office was asked during a VNC Homelessness Committee meeting to please provide portable restrooms and handwashing stations. However, our City has taken no meaningful action to get these people out of the park and off the streets, or even to provide the requested restrooms. Meanwhile, dozens of beds remain empty a few blocks away at the Venice Bridge Home, and residents can’t safely use the library or park.

It is clear that City efforts – like the clean ups at Westchester Park and Ocean Front Walk – have simply moved street camps from one place to another.

If we are ever going to restore public order, end street camping, and get people the help they need, we must regulate our public spaces, enforce our existing laws, and set clear choice dates for people to move and stay off of our streets. Read my full plan here.

I know you are all frustrated and tired of this. So am I. But, we must all keep doing our best.