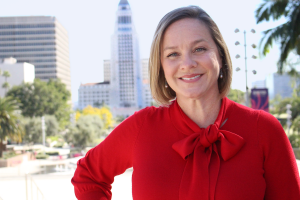 Given the recent announcement by District 11 City Councilman Mike Bonin that he will not seek re-election, attention has now shifted to the pool of candidates vying to replace him. One of the top contenders, Traci Park, provided the Loyolan with some insight as to how she would govern if elected to the seat.

Park, who is currently a partner at Burke, Williams & Sorensen Limited Liability Partnership (LLP), is a 2001 graduate of Loyola Law School. She grew up in Southern California and has lived in Venice since 2015.

While Park says there are a plethora of issues to address in the 11th district, she finds there is not one “more urgent than homelessness and public safety.”

Pointing out what she believes to be flawed in the city’s response to the crisis, Park criticized the implementation of Proposition HHH—a $1.2 billion bond meant to build housing for homeless Angelenos—saying its “projects are all over-budget and over-schedule, [with] building costs soaring well over $500,000 per unit.”

“Only a fraction of the promised units have actually been built, and when the money is spent, we will only have about half of the original number we were promised,” said Park. She also pointed to issues with the 11th district’s A Bridge Home project, saying, “that patchwork system sheltered far too few and has had very limited success, especially in Venice, where very few people from that facility actually moved into permanent housing.”

Speaking more broadly on the issue of housing in L.A., Park said the city “should be a city where young people and working class families can afford to live and buy a home.”

She noted that this is not the case as “bureaucracy and extreme costs and delays for permitting and funding deter many local builders and good ideas out of the L.A. marketplace.” Park mentioned the majority of housing developed over the last 30 years “has been market and luxury-rate housing, which continues to price hardworking Angelenos out of the market.”

Hoping to ameliorate this issue, Park noted that she would “work with the city to reform our systems to make it easier to develop new affordable housing” and “fight to protect the affordable housing we already have.”

According to Park, “as the homelessness crisis [continues] to worsen, so [does] crime,” saying “parts of [Council District] 11 have suffered terribly.” She criticized the city for voting to cut police department funding by $150 million last year, and noted that unhoused persons “living in encampments are 30 times more likely to be a victim of crime than others.”

In order to address these issues, Park said that she would push for the “collection of real-time, needs-based data” to better understand the “needs of the unhoused population.” She added that she would “demand a city-wide plan, budget and timeline for addressing the crisis” and would ensure that “accountability and performance measures” were in place on service providers.

Addressing the topic of crime, Park said that she would “restore funding and resources to our public safety partners” and “protect sensitive areas.”

When asked about how she would handle concerns facing LMU, Park said that she is “firmly committed to being a good partner to [her] alma mater, and [she] will always be available to consult, advise and assist on any University issues that may require a partner at City Hall.”

Park added that she “will ensure that the Loyola community has a seat at the table during conversations that affect the local area.”

When asked how she would address issues regarding student housing and land use, Park said that “student housing costs make college and graduate school cost-prohibitive,” noting that “there is a lack of adequate on-campus housing at [LMU].”

Park stated that “as [LMU] expands, there must be collaboration between the University and local residents” to remedy these concerns.

Addressing noise complaints raised by residents who live near the University, Park emphasized that “it is important that everyone recognize that all local residents must live in a respectful environment,” adding that, if elected, she would “be available to consult and intervene as needed on community concerns.”